'A Minor Place': No Words To Explain


In my last post, I mentioned the implied conversations and mental crosscurrents that may exist between the three disparate bodies of work in the ‘A Minor Place’ exhibition, which I currently share with Shaun Morris and Andrew Smith.  I also conceded that, to the outside observer, these might not be immediately overt.  The reality is that my/our perception of these may be as much the consequence of numerous actual conversations, or of an understanding of how our work got where it currently is, over time, as it is deliberately contrived for our current situation.

Thus, my feeling is that the ties that mind ‘A Minor Place’ together are more to do with certain intangibles such as a shared sensibility towards the contemporary urban/industrial landscape, a variety of philosophical or political empathy, or even some sense of twenty-first century melancholy.  Certainly, we are all of a similar age, and may tend to haunt similar kinds of territories, both physical, and possibly mental too.  In last year’s ‘Mental Mapping’ show, Andrew and I explored the idea that to find oneself physically located is as much a case of exploring interior landscapes, as cartographical or topographical ones. In his own, and stylistically quite different way, and for some time now, Shaun has been doing something related to that, through his suites of paintings of elevated road systems and lorry parks.

In fact, I’ve come to think of ‘A Minor Place’ as, at heart, a poetic enterprise.  And, for that very reason, it pleases me that the two text panels with which we chose to augment the visual work on display were pieces of creative writing in their own right.  Avoiding my habitual tendency to over-explain, I chose to write a piece, triggered by the photograph by Shaun which appears throughout the publicity material.  This resonant image supplied my way into a piece that, whilst it makes oblique reference to each artist’s body of work, is a wholly subjective response to it.  True to form, Andrew’s piece is even more pleasingly oblique and potentially multi-layered.  I’m regularly impressed by how he constructs these allusive narratives – drawing the reader into an implied account of events, whilst leaving it impossible to divine any definitive logic.  The key may actually be in certain chance operators he applies to the process, but the effect is often definitively absurdist or Surreal, and yet emotively resonant too.  In this particular case, Andrew’s visual presentation of his text also pointed to the acknowledged influence of Futurism. 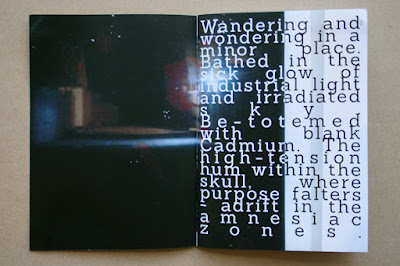 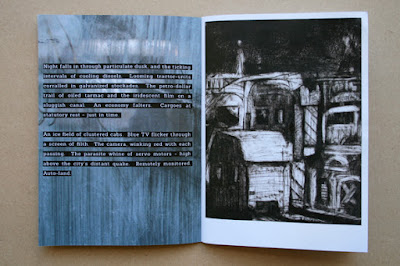 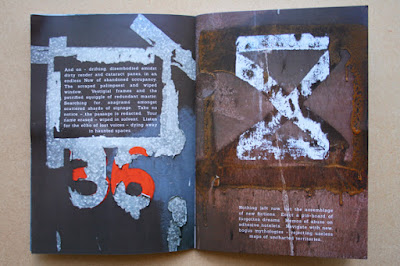 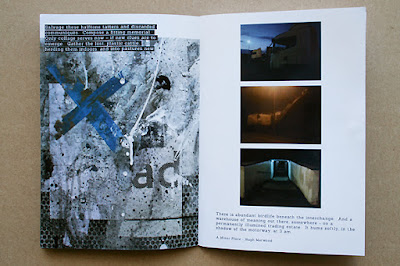 Anyway, I’m explaining again, so instead I’ve included both pieces here for you to judge for yourself.  I’ve also included images of the publication we had designed and printed to accompany the exhibition.  Here, our texts were accompanied by a series of images - supplied by each of us, and combined in a series of spreads by Designer, Chris Cowdrill.  The latter section also included reproductions of Andrew's 'Stock Footage' suite of digital prints.  These were also exhibited on the gallery wall, and combine layered juxtapositions of apparently unrelated stock images, with dead-pan, but strangely resonant, textual descriptions of the results. 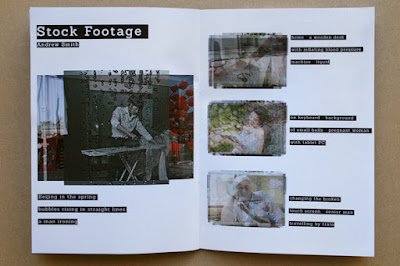 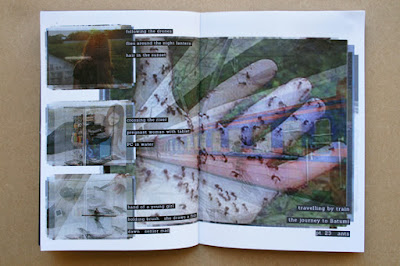 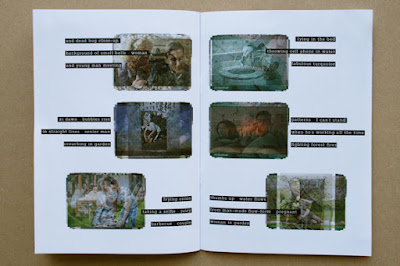 Overall, our intention with our little booklet, was to generate an artistic statement in its own
right, rather than a traditional catalogue - and Chris’ design skills and creative contribution towards achieving this shouldn’t be underestimated.  I really enjoy the idea of using such things to add another dimension to an exhibition, to offer some useful clues about the work, or simply to provide an affordable souvenir for those not in a position to purchase actual artwork.  It's certainly an artefact that can outlive the temporal span of the show itself, and such is the quality of Chris’ work  - I was even vaguely reminded of the notable artwork by Vaughan Oliver, that used to accompany 4AD Records releases.

Wandering and wondering in a minor place.   Bathed in the sick glow of industrial light and irradiated sky.  Be-totemed with blank Cadmium.  The high-tension hum within the skull, where purpose falters - adrift in the amnesiac zones.

Night falls in through particulate dusk, and the ticking intervals of cooling diesels.  Looming tractor-units corralled in galvanized stockades.  The petro-dollar trail of oiled tarmac and the iridescent film on a sluggish canal.  An economy falters.  Cargoes at statutory rest - just in time.

An ice field of clustered cabs.  Blue TV flicker through a screen of filth.  The camera, winking red with each passing.  The parasite whine of servo motors - high above the city’s distant quake.  Remotely monitored, Auto-land.

And on - drifting, disembodied amidst dirty render and cataract panes, in an endless Now of abandoned occupancy.  The scraped palimpsest and wiped window.  Vestigial frames and the petrified squiggle of redundant mastic.  Searching for anagrams amongst scattered shards of signage.  Take no notice – the passage is redacted.  Your name erased – wiped in solvent.  Listen for the echo of lost voices – dying away in haunted spaces.

Nothing left now, but the assemblage of new fictions.  Erect a pin-board of forgotten dreams.  Memos of abuse on adhesive notelets.  Navigate with new, bogus mythologies – rejecting useless maps of uncharted territories.

Salvage these halftone tatters and discarded communiqués.  Compose a fitting memorial.  Only collage serves now – if new clues are to emerge.  Gather the lost, plastic cattle, herding them indoors, and into pastures new.

There is abundant birdlife beneath the interchange.  And a warehouse of meaning out there, somewhere - on a permanently illumined trading estate.  It hums softly, in the shadow of the motorway, at 3 am.